‘Some Silver by John Hardman & Co for Charles Lygon Cocks’: a new discovery 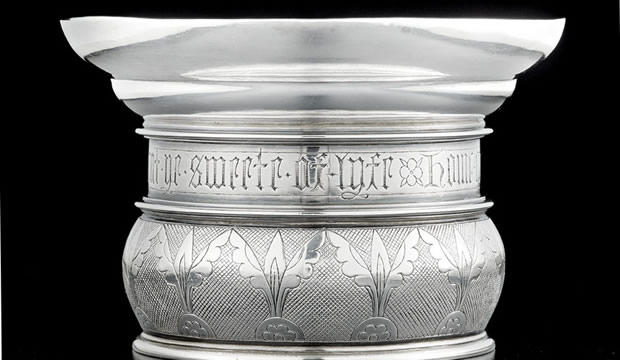 In 1996, the Decorative Arts Society Journal (20) published Martin Levy, ‘Some Silver by John Hardman & Co for Charles Lygon Cocks’ (pp. 1-10).  The article discusses silver supplied to various members of the Cocks family, and in depth a group of silver supplied in 1870 for Charles Lygon Cocks (1821-85) of Treverbyn Vean, on the occasion of his marriage to Josephine Nagle. Each piece of this wedding gift, presumably designed by John Hardman Powell, but overseen by Cocks himself, was paid for by a family member or by a friend.  The article listed, in an appendix, eight items, of which only three had been traced; these are now all in the collection of the Birmingham Museum & Art Gallery.

On 16 July 2013, lot 285 at Holloway’s (Banbury) was a toast rack purchased in 1856 by Charles’s sister Henrietta Cocks.  Until it re-appeared in Oxfordshire, this piece (which originally resurfaced with Alan Landis in Sydney, Australia) had only been known from a drawing in the Hardman Archive (Levy, fig. 3); it is now in a private collection.

Now the missing sugar bowl (see above) from the 1870 wedding commission has come our way from an English private collection, where it had been since 1993.

On 27 May 1870, Cocks requested ‘an estimate of cost of sugar bowl I enclose as soon as possible … The inscription I wish to be in a single line letter home content [in gothic script] on a bright ground and the ornament below burnished on a hatched ground.  The bowl will be the size of drawing.’  On 31 May Cocks wrote again to Hardman asking the firm to ‘proceed with the sugar basin as quickly as possible.’  The bottom was to be engraved: ‘The Gift of Jemima A. Cocks to Charles Lygon Cocks on his marriage 1870’ (see below). 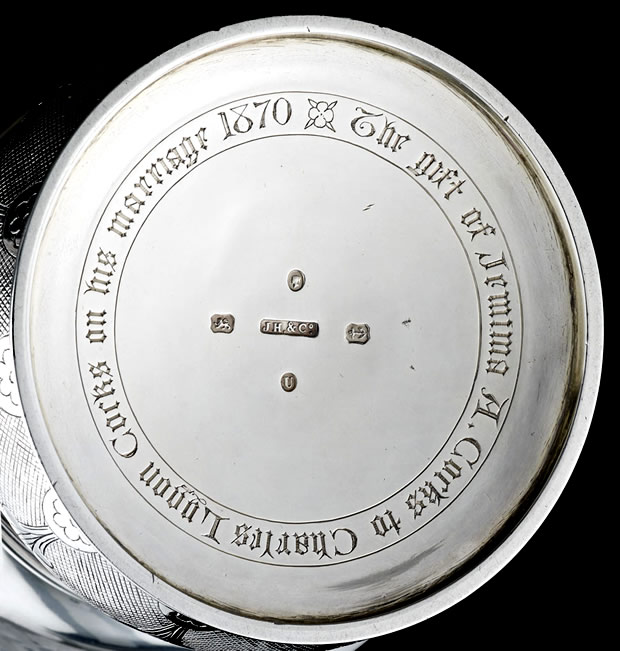 This delightful rediscovery has now entered another private collection.