Writing in 1937, Nikolaus Pevsner (1902-83) noted that ‘While engaged in research on the origins of the Modern Movement quite by chance [he] came across the name and two isolated examples of the work of Christopher Dresser.’

(Architectural Review, LXXXI, 1937). The works to which Pevsner refers, and which he illustrates, are two electroplate and glass cruets, manufactured by Hukin & Heath, Birmingham, circa 1878. 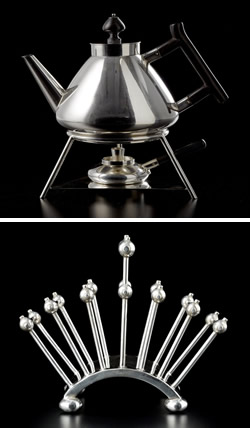 These two objects represent a stark contrast to the fussy production that was a feature of mid-nineteenth century British manufacture, and can certainly be seen as anticipating the functional, pared-down designs that typify the work of the pioneer designers who followed: Mackintosh, Hoffman, Breuer and others. But as much as Dresser is admired for his proto-modern aesthetic, he could, at the same time, be a more typical Victorian historicist.

Since Pevsner’s Pioneers of the Modern Movement (1936), Christopher Dresser has been held in increasingly high esteem. Dresser featured with twenty works in the important ‘Exhibition of Victorian & Edwardian Decorative Arts’ mounted at the Victoria and Albert Museum, London, in 1952.

Dr Dresser has now also been the subject of numerous monographic exhibitions, starting with ‘Christopher Dresser’, mounted by Richard Dennis, John Jesse and the Fine Art Society in 1972. This was followed by the first non-commercial exhibition ‘Christopher Dresser 1834-1904’ at the Camden Arts Centre in 1979.

More recently the Cooper Hewitt, New York and Victoria and Albert Museum mounted ‘Shock of the Old: Christopher Dresser’s Design Revolution’ (2004), an authoritative appraisal of the designer’s work. Dresser’s production, in many media, is now represented in museum and private collections across the globe.

For PAD, London, 2014, we are pleased to be offering a range of work by Christopher Dresser, principally the much-admired proto-modernist metalwork (on which his reputation still stands), as well as some of his inspired and original ceramics. Further details appear in the ‘Stock’ section of this website.