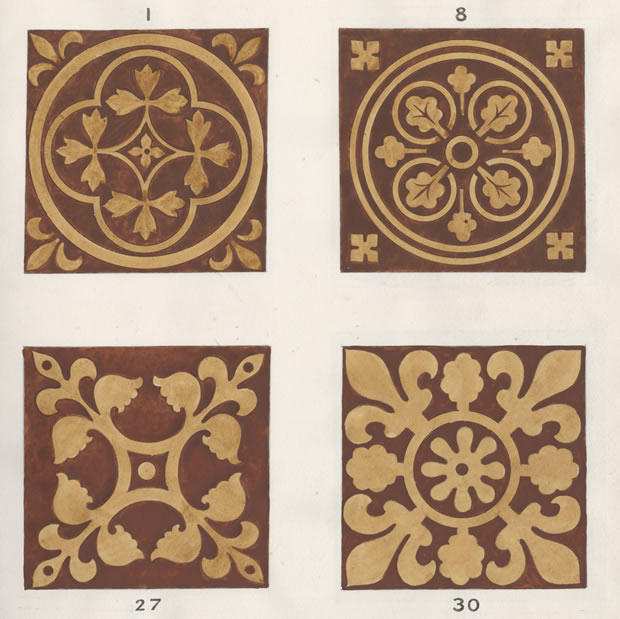 In March last year we acquired from the auctioneer Dominic Winter, but without additional provenance, a leather bound album of watercolour designs for tiles.  The album, which measures 34.2 x 34.5 cm, is inscribed on the cover ‘Patterns of / Minton, Hollins, & Co.’s / Encaustic Tiles. / G. Edmund Street, Esq., R.A. / 1881’.  The Whatman paper is watermarked for 1880, the year before Street’s death.  Between the marbled boardsand end papers, there are fifty-four sheets (one hundred and eight pages), of which fifty-nine pages are blank, and four, the first four, simply lined.

Of the designs, which are in the main full size images for 11 x 11 cm tiles, four are in colour (see above), while the remainder are in pen and grey wash.  Each design is numbered, but randomly, from 1 to 2802; the numbering is neither complete nor sequential.  The final six images show four tiles together, forming part of a pattern.  Tiles following some of the patterns were certainly made; indeed one corresponding with pattern 30 (above) sits on my desk as a mat for my less than remarkable coffee mug; it was formerly in the well-known Beulah tile collection.

Minton, Hollins & Co. was created as part of Herbert Minton’s empire during the 1840s specifically for the production of tiles.  The best known designer of encaustic tiles for Minton is A.W.N. Pugin (1812-52), but the most logical explanation for the inscription on the cover of our album is that Street (1824-81) also supplied designs.  Another, less likely, possibility is that Street simply had this album of designs to show potential clients for his architectural work.  What is perhaps hard to explain is how and why this album was put together during the last year of Street’s life.

In total, there are 162 individual designs for Gothic tiles, a few of which are 13 x 13 cm in size.  We should welcome any advice as to the history and purpose of this remarkable survival, which presently forms part of our library.