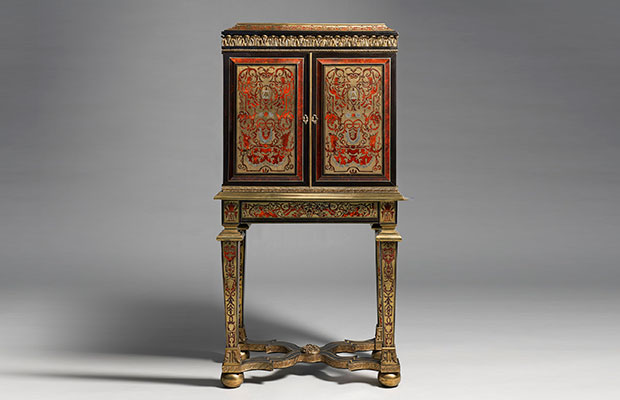 The cabinet illustrated above, now in an American private collection, was sold at Christie’s (London), 12 July 2012, lot 6.  It can be attributed with confidence to Louis Le Gaigneur , about whom little is known and whose documented oeuvre is also small; see Martin Levy, ‘Sincerest Form of Flattery’, Country Life, 15 June 1989, pp. 178-181, and also the same writer’s ‘Taking Up the Pen’, Country Life, 23 April 1992, pp. 60-62 (for an inkstand at Attingham Hall).

As stated in the Christie’s auction catalogue: ‘The wax seal to the reverse of this cabinet [the one illustrated here] bears a Barons coronet above the monogram ‘M’ [and] this combined with the label inscribed ‘Lady Lamb’ implies an almost certain provenance of the Lambs, Viscounts Melbourne, who from 1815, also held the additional title of Barons Melbourne (the former in peerage of Ireland, the latter in the peerage of the United Kingdom). The Lamb family provides three potential candidates for the ‘Lady Lamb’ referred to by the label, the most likely, perhaps, being Elizabeth Lamb 1st Viscountess Melbourne (1751-1818). She was part of the Prince Regent’s close circle and was considered to have ‘significant influence’ with him, as such she would have been a frequent visitor to Carlton House and would have had access to his craftsmen such as Le Gaigneur.’

When the contents of Attingham Hall were sold by the auctioneer Robbins, beginning on 30 July 1827, lot 115 was ‘A MAGNIFICENT TORTOISE-SHELL AND BUHL PARISIAN CABINET, With Coved Top And Panels, In Ebony and Rosewood Frame, Fitted up inside with Ten Drawers, banded Satinwood and kined Velvet, enclosed by Folding Doors…2 feet by 1-Foot-1, and 4 Feet-4 High’

In 1995, John Hardy had three poor photocopied images of what is certainly the same piece, with the word ‘Attingham’ written across the top.  The cabinet, which is all but identical to the one illustrated here, is not now at Attingham, nor can John Hardy recall how and when he came by the images.

With a view to publishing further details about this elusive maker, who may have been born in Caen in 1777, information about the present whereabouts of the Attingham Hall cabinet would be gratefully welcomed.

In May 2016, the cabinet was placed on loan at the Museum of Fine Arts, Boston.