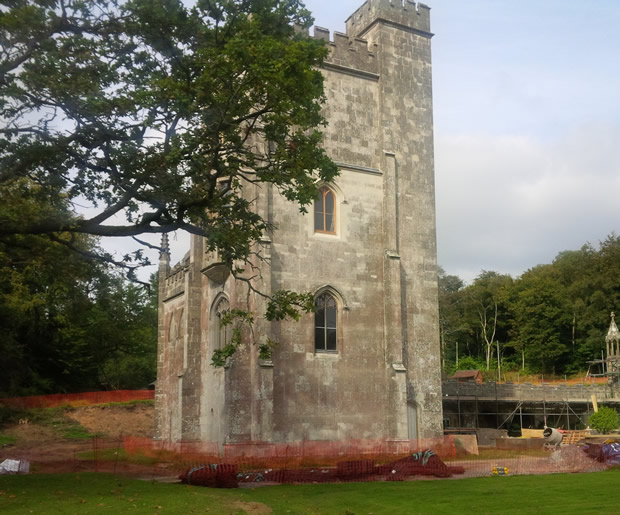 The fitting climax to the consistently stimulating ‘Recovering Fonthill’ symposium and visits organised by Caroline Dakers (University of the Arts London, 12-13 September),

was the haunting experience of standing on the ground beneath what was once the nearly three hundred foot tower at the centre of Fonthill Abbey (see below). 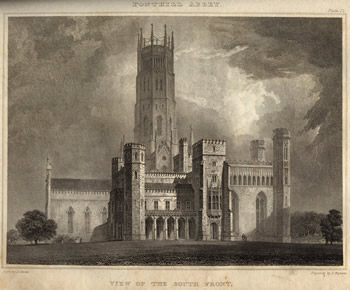 As we stood in the space formerly occupied by the Octagon, between King Edward’s Gallery and St Michael’s Gallery, one could feel the ghosts of the luscious rooms once filled with Beckford’s idiosyncratic treasures; interiors so clearly depicted in John Britton’s Graphical and Literary Illustrations of Fonthill Abbey (1823).  But all that is left of James Wyatt’s magnificent but fated edifice is a small section, now undergoing careful restoration (see above).

From the footprint of the Abbey, we looked back at the long tree-lined approach, presently somewhat narrowed by later incursions.  Then a meandering walk, under the guidance of Amy Frost, allowed us to descend through the picturesque landscape to the lake.  From the water’s edge, we looked back at the tree-obstructed view through which the Abbey would have been seen.

Over two days, ‘Recovering Beckford’ added new dimensions, many of which had to be sensed rather than seen, to the material survivals of William Beckford’s life and passions.