The Destruction of the Country House: a symposium at the V&A, forty years on 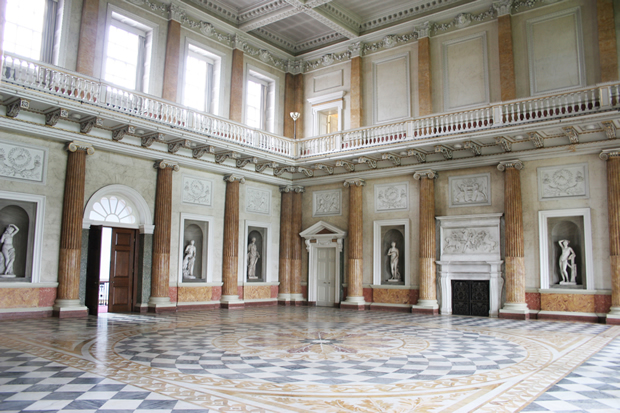 With the latest twist in the fate of Wentworth Woodhouse (above) on everyone’s mind, the lecture theatre at the Victoria and Albert Museum was packed on Saturday for a symposium, organized by ‘SAVE Britain’s Heritage’ and the V&A, to commemorate the fortieth anniversary of the seminal exhibition ‘The Destruction of the Country House’.

The day began with an inspiring introduction from the ebullient Sir Roy Strong, who is clearly at no risk of ‘destruction’.  Sir Roy recalled how he had been approached by John Harris (another eminent and entertaining speaker during the morning session) and had decided, in the days before committees and trustees, that ‘The Destruction of the Country House’ was an exhibition that had to be mounted. 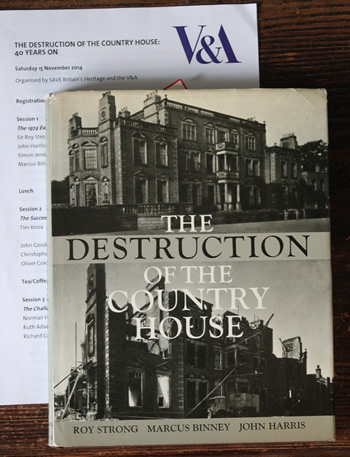 For those of us over 55 or thereabouts, the impact of the wrecking ball hovering over the beginning of the exhibition made a lasting impression. The litany of lost houses intoned by John Harris for the exhibition has now increased to some 2000, but the position has vastly improved since the worst days of the last century: in 1955 alone, one great house was lost for each day of the year.  SAVE grew out of the exhibition, and continues to be masterminded by the indefatigable Marcus Binney, who gave a splendid overview of how saving our heritage has been managed over the past forty years.  Simon Jervis, a member of the late Peter Thornton’s exceptional team at the V&A in the 1970s recalled how attitudes, under Peter’s guidance, honed a respect for historic interiors, complete with all the accretions of generations.

But the day was not all nostalgia, far from it.  One of the encouraging features was that many in the audience, and some of the speakers, had scarcely (if at all) been born in 1974; this demonstrates the extent to which our cultural inheritance is appreciated and remains relevant across the generations.  While schemes like ‘Acceptance in Lieu’ and ‘Conditional Exemption’, the munificence of the Heritage Lottery Fund and the National Heritage Memorial Fund, as well as special Treasury grants, have helped save houses and their contents, losses still continue.  Sometimes, for specific objects, the Reviewing Committee on the Export of Works of Art can step in.  Tim Knox, a great conservationist, and formerly involved with both AIL and the RCEWA elucidated the many challenges, and their solutions.  Beyond emotional and aesthetic considerations, other speakers emphasized practical solutions, and the continuing value for education and scholarship (Oliver Cox) and tourism (Norman Hudson) of country houses, and their archives.

Many surely left the day encouraged by the pragmatic way that, today, conservation issues are being based on sound financial plans; on partnerships between private owners and professional advisors, and all against the background of the V&A’s enterprising and important 1974 exhibition. One wonders if such an exhibition, which received widespread, international interest, would happen today.  Of course the forthcoming celebratory exhibition at the Art Institute of Chicago ‘Ireland: Crossroads of Art and Design, 1690-1840’ owes something to the legacy of 1974: the organizer is Christopher Monkhouse, who as a young curator was part of the ‘The Destruction of the Country House’ team.