Walter Morrison, the ninth (of eleven) children born to James Morrison (1789-1857) and his wife Mary (1795-1887) was just twenty-one when his father died leaving him £300,000 (a fortune that today would be the equivalent of £28m) and the Malham Estate in Yorkshire.  While he never needed to work, he inherited the Morrison habit of public service, first sitting as a radical reforming Member of Parliament from 1863-74; acting as treasurer to the Palestine Exploration Fund for 54 years, and performing numerous unsung acts of philanthropy.

The 10,000 acre Malham Estate, with its dramatic landscape, had been acquired in 1852 by James Morrison from Thomas Lister, 3rd Baron Ribblesdale.  Malham House (see below in period image, and today, courtesy of Jessica Levy), on which Walter would concentrate after losing his Parliamentary seat, burned out in a disastrous fire on 23 April 1873 but was rebuilt inside the old walls. When John Ruskin visited in 1878, he found the house ‘quite delightful’.  The chairs, in the ‘modern gothic’ taste, presumably date from the mid-1870s.

No papers have been traced to indicate the name of an architect for the restoration of Malham House (but see note below, added 5 April 2020), nor for the supplier of the furnishings.  Thus an attribution for the chairs illustrated here remains problematic.

We are, however, hugely grateful to Robin Bundy,* archivist of the Malhamdale Local History group for references from the catalogue of the Knight, Frank & Rutley sale on the premises, 8-10 November 1927.  Lot 63, in the Drawing Room is ‘An Ebonised and inlaid elbow chair, the seat, arms and padded back in green morocco, on lion claw feet’. Lot 64 is ‘A similar elbow chair’.

The chairs sold for £3.10s. each.  The following two lots, likely the present pair, are described as ‘A semi-circular elbow chair en suite (lot 65) and ‘The companion chair’ (lot 66); they sold for £3.10s. and £3.5s., respectively.  Lot 93, in the Business Room (with no mention of lion claw feet) was ‘An inlaid and ebonised semi-circular chair with seat and elbows in green morocco’; this sold for the considerable sum of £11.1s.6d.

Neither the sale catalogue nor an advertisement for the sale give a clue about the designer of the present chairs, but it may be significant that the particulars note that Walter Morrison owned a copy of Owen Jones, The Grammar of Ornament.  So, perhaps his choice of furniture was influenced by his brother Alfred (1821-97), whose furniture was designed by Jones and manufactured by Jackson & Graham.  Walter’s own interest in design, notably Byzantine architecture, is confirmed by the Byzantine-inspired chapel at Giggleswick School, near Malham, for which he paid.

But what do the chairs themselves tell us?  The form is distinctive and idiosyncratic; surely indicative of a designer familiar with contemporary fashion.  Two details, however, provide clues that may, in due course, lead to firmer conclusions.  The use of ebonised mahogany, with patterns of a lighter wood inlaid with ivory have parallels with an octagonal centre table (private collection) and a pair of open bookcases (with Paul Reeves), which are surely from the same workshop.  Robin Bundy draws attention to lot 59 in the 1927 sale, from the Drawing Room, ‘An ebonised and inlaid octagonal Table, on cluster column and open scroll support, 4ft diameter’; this is surely the table now in a private collection (see below, right). 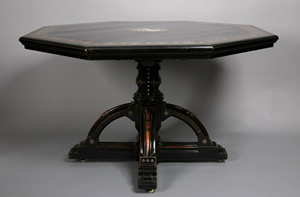 While any suggestion of a designer (although Richard Charles might be considered) is little more than idle, and largely unjustified, speculation, more certainty applies to the manufacturer.  One of the two bookcases has the label of Pratt & Prince of Bradford.

It can now reasonably be shown that the chairs, together with the table were originally part of a single commission for Walter Morrison.

The green/blue leather upholstery replicates a sliver of the original found while the chairs underwent conservation.

‘Morrison’s detailed accounts for the building work that totalled £1624 15s 2d survive, but sadly these do not include any details of the furnishings nor is there any reference to the architect.  The architect for other building work on the estate is said to be “someone from London”.  However, the architect for Giggleswick School Chapel that was paid for and largely specified by Walter was Thomas Graham Jackson who was born within a year of Morrison and would have been a contemporary at Oxford, though not at the same college.’  Robin Bundy plausibly suggests that Jackson must be a good candidate for the architect of the Malham Tarn restoration.

Thanks to Caroline Dakers for her help in preparing this note.