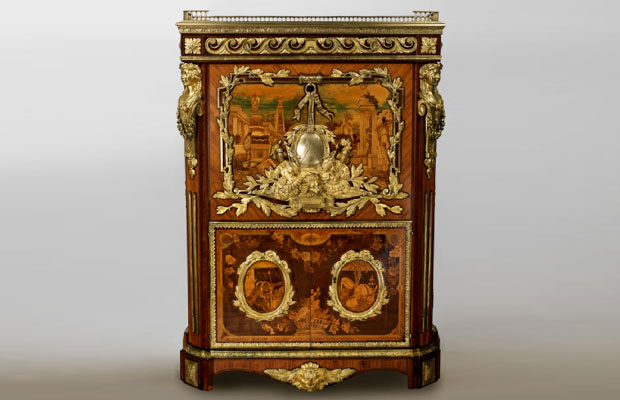 At a time when many fear that connoisseurship has become a diminished aspect of art historical study, a small display at the Wallace Collection, London is hugely to be welcomed (on view until 29 August).

Standing side by side are the well-known Parisian sécretaire à abatant by Pierre-Antoine Foullet (F299, above), dating from circa 1777 and a late nineteenth, century (probably London) ‘copy’ made as part of the contemporary fashion for reproducing masterpieces of the ancien régime.

For the young student of furniture, or indeed for someone with a whole lifetime’s interest in the decorative arts, this small installation at the Wallace Collection affords a wonderful opportunity to identify and make judgements about the differences between superficially ‘identical’ pieces, made a hundred years apart.

The initial impression that one piece is a literal copy of the other is soon dispelled: the marquetry, despite degradations on the magnificent and aristocratic Foullet example, is far less detailed and beautifully executed on the nineteenth-century version.  The construction of the drawer linings is not the same, nor the construction of the backboards, nor the use and type of screws, and so on.  And the gilt-bronze mounts can be seen to be copies made from drawings rather than re-casts of the originals.  The sizes, details, casting and finishing can all be observed, even though a protective glass case, to be distinctly different.

To look intently at the Foullet sécretaire, as this small exhibition encourages, enables one to understand in an instant why an appreciation of French eighteenth-century design and manufacture has endured to this day.  The two pieces together immediately demonstrate how the late nineteenth century also acknowledged and appreciated such masterpieces from an earlier era.