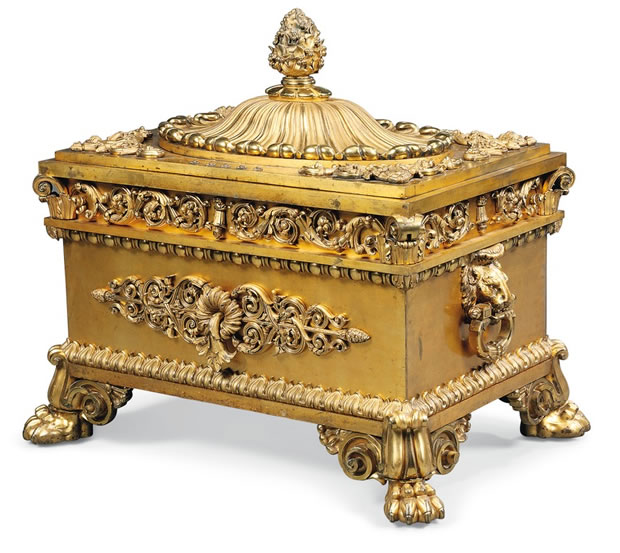 Although, for now, the precise origins of this remarkable and perhaps unique masterpiece remain unknown, it is clearly an exceptional work by a talented designer and maker, and was surely commissioned for the grandest of interiors.  Since this seemingly unique object came to light at auction (Christie’s, New York, 15 April 2005, lot 125), mystery has surrounded its purpose and authorship.

Measuring 91 x 103 x 71 cm and weighing no less than 182 kg, this massive and weighty sarcophagus-form, lidded casket is designed in a form associated, during the Regency period, with wine-coolers and cellarettes. 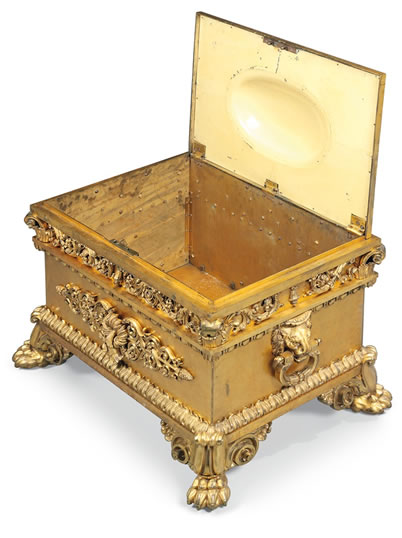 But it is hard to imagine, despite the Bacchic thyrsus (not here bound by grapes) that such a massive gilt-lacquered metal object was conceived to hold wine, however fine the vintage. The suggestion that this was a strong box (Christies, London, 6 July 2017, lot 9) makes more sense, although what as such it would have contained is unknown.  Clearly a piece for show, this object was manufactured in a manner that would evidently have protected its contents, and suggests that it once held something valuable.  But what, and where?  If for a dining room, which is the usual setting for such a form, then perhaps, unusually, it contained  a precious set of silver-gilt objects.  Or might it have held the plate in a fashionable Neo-classical church?  An alternative suggestion is that this was as a demonstration of the maker’s skill, perhaps for display in the workshop.

Provenance is no help as nothing is known of its history before the third quarter of the twentieth century.  The ‘sarcophagus’ belonged to Lucie and Joachim Schuller, who created Museum of Art and Chivalry in New Hampshire, but by 1973 the sarcophagus belonged to the Riveredge Foundation in Calgary, who in 1979 gave it to the Glenbow Museum, Calgary, the vendors in 2005.  The Glenbow sale was to raise funds for acquisitions closer to the institution’s core interests in art and artefacts documenting the culture of Western Canada.

The ornament, more than the form, has led to the reasonable suggestion that Regency cabinet-maker and entrepreneur George Bullock (1782/83-1818) might have been the designer. But in truth there is nothing in Bullock’s reasonably well documented oeuvre to support this suggestion. While there are ‘massy’ wine-coolers, such as the pollarded oak example (together with a corresponding plate-warmer) supplied by Bullock in 1816 for Matthew Robinson Boulton (Christie’s, Great Tew Park, 27-29 May 1987, lots 55 and 54), and the large circular wine cooler supplied by Bullock to the British Government for Napoleon’s use on St Helena (Martin Levy, Napoleon in Exile, 1998, fig. 55), none is based on such a simple, rectangular form.  But, of course, in making an object strong and secure, the straight-sided rectangular design was suitably practical. 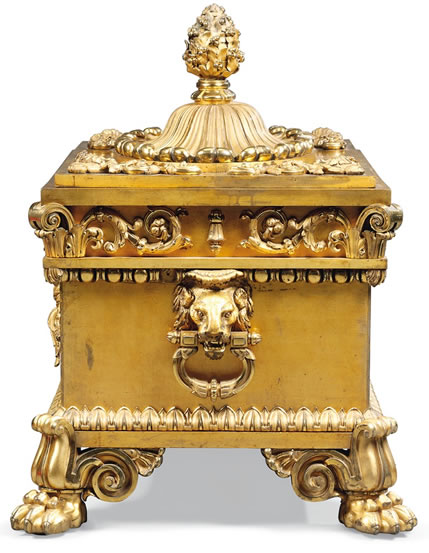 It is the ornament that is closest to that found, on a smaller scale and more delicately executed, on furniture manufactured in Bullock’s workshop, in Tenterden Street, London.  On the present piece, however, big, broad mounts would have been called for; anything less would have looked insubstantial.

The thyrsus, the lappet mounts around the base, the feet, the scrolls in the frieze of the lid, and the huge floral rosette and corner mounts on the lid, might all show a familiarity with details on documented furniture from George Bullock’s workshop, and to designs in the ‘Tracings by Thomas Wilkinson, from the Designs of the late Mr George Bullock 1820’.    These designs, known as the Wilkinson Tracings, are now in the City Museums and Art Gallery, Birmingham.  However, this piece cannot be connected with Bullock’s workshop, and there is no reason to presume that it dates from much before 1820.

Based on evidence of accounts for Tew Park and Shrublands, it is clear that Bullock-like (or indeed Bullock-designed) metalwork was manufactured by W & S Summers, the New Bond Street firm of ‘Stove and Lamp Manufacturers’. The firm was just around the corner from Tenterden Street, and their letterhead is embellished with a Bullock-like thyrsus comarable to the one on the sarcophagus under discussion.  Bullock submitted to Boulton for Tew Park, Summers’ account for £127.16s.6d. ‘being the full amount of their bill of Ironmongery…’; this surely relates to the grates and fenders, some of which were sold from the house 1987.  Summers was also a buyer of metalwork, models and patterns at the 1819 Bullock ‘stock-in-trade’ sale (see Martin Levy, ‘George Bullock’s Partnership with Charles Fraser, 1813-1818, and the Stock-in-Trade’ Furniture History XXV (1989), pp. 153-54.