Charles Lepec (1830-1890) has now emerged from obscurity to be recognised as the most remarkable enamel artist active in France during the third quarter of the nineteenth century.

The ambivalence toward French decorative arts from the middle decades of the nineteenth century can perhaps be understood against the backdrop of a sense of loss for the dignified and aristocratic grandeur encapsulated by the culture of the ancien régime. France was dominated by the bourgeoisie by the time of the Second Empire, and the frequently backward-looking decoration of this period tended toward the showy: the taste of the nouveaux riches. But this viewpoint has come to be seen as representing an incomplete and unfair assessment of a fertile period, in which technical and artistic invention introduced a great degree of originality, with such work now appreciated for its distinctly nineteenth-century aesthetic merit.

The French enamel artist Charles Lepec first reached an audience outside France through his participation at the London International Exhibition of 1862. It was on this occasion that his work came to the attention of Alfred Morrison (1821-97), who would become his greatest patron. When Lepec planned his stand at the Paris Exposition Universelle of 1867, a large proportion of his display was borrowed back from Morrison.

Lepec, who was at his most active during the Second Empire period, exemplifies this sophisticated strand of French creativity. He was an artist who excelled in the medium of enamels and was notably original in his compositions as well as and technically innovative. Many of his contemporaries working in the medium depended on compositions prevalent during the Renaissance.

This short video introduces two pairs of recently identified works by Lepec, formerly in Morrison’s collection and exhibited at the 1867 Paris World’s Fair. 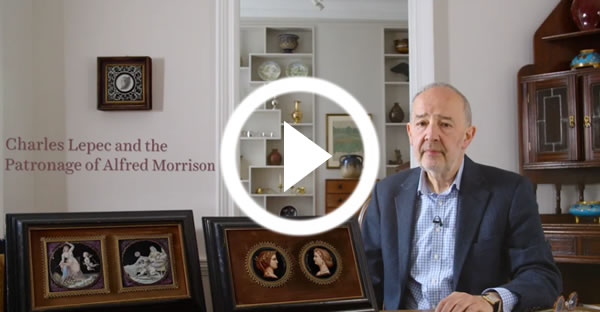