Blairman’s in the 1930s and 1940s: exhibition catalogues from our archive 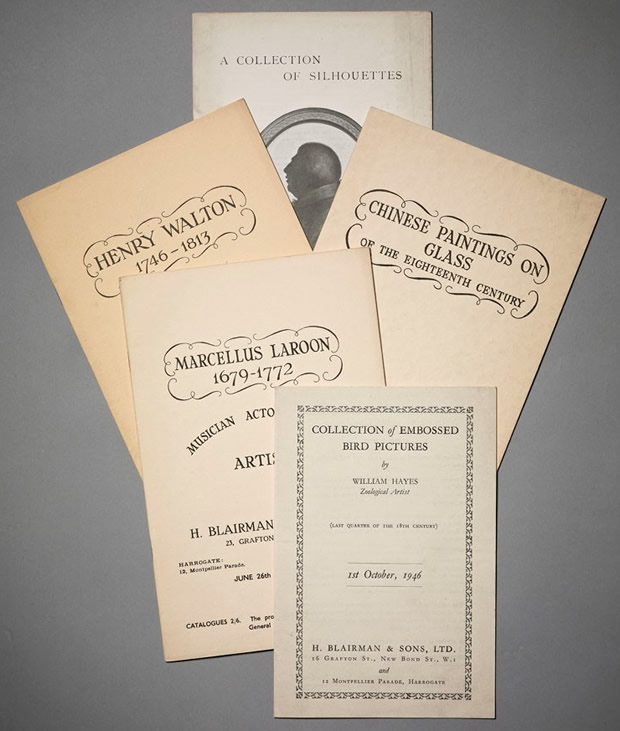 Philip Blairman (1896-1972), whom I remember well in his older age, remains an inspiration.  He had taste, curiosity and foresight.  It was my grandfather who saw our firm flourish in Harrogate and London, as well as, for a period, in New York.

He had a dealer’s sense of fields that were neglected, but which at the same time had commercial potential.  He understood the importance of exhibitions and scholarship, as well as the significance, for the trade as a whole, of collaborative events such as the Antique Dealers’ Fair and Exhibition at Grosvenor House. 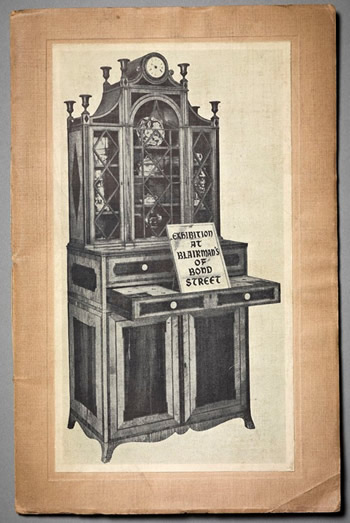 Rummaging through our archives this week, I came across an envelope containing some old exhibition catalogues from Philip Blairman’s time. An Exhibition of Fine Old English Furniture Pictures and Works of Art (Summer 1937) saw the firm at 28 New Bond Street, London, 12 Montpellier Parade, Harrogate and the original location, from 1884, at Mostyn Street, Llandudno.

Much of the furniture was conventional, but there were pieces that showed a greater degree of originality: a cabinet (see above) from Weeks’ Museum, a pedestal desk described as ‘New England’ and a sofa ‘by Duncan Phyfe’.

There were works of art from ‘the collection of the late Lord Rothschild, including ivory tankards and cups (presumably acquired that April from the sale at 148 Piccadilly), eighteenth-century Chinese works of art, and, most intriguingly of all, ‘Four Very Interesting Signatures of Thomas Chippendale, Junr., one dated 1778, bearing the address, St. Martin’s Lane, Charing Cross. One has a rough sketch for a girandole.’  Where are they now?

In October 1946, addresses by then being at 16 Grafton Street, London and still in Harrogate, there was a Collection of Embossed Bird Pictures by William Hayes, exhibiting more than fifty works.  It is possible that the work shown to the left was no. 4B, A Small Horned Owl; this remains with a descendant of Philip Blairman. 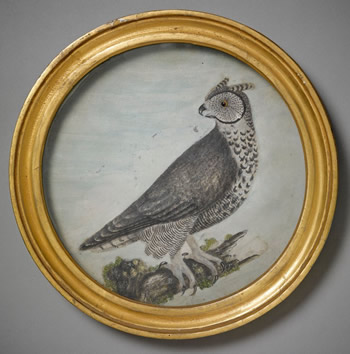 Exhibitions, undated but probably from the early 1940s, show the firm moving from 16 to 23 Grafton Street, in Harrogate, and also having a presence at 20 East 55th Street, New York.

These include Chinese Paintings on Glass of the Eighteenth Century, Marcellus Laroon 1679-1772 (including loans from the Duke of Buccleuch, Sir Alec Martin and Sir Osbert Sitwell) and Henry Walton 1746-1813 suggested by Sir Osbert Sitwell (see above).

The introductions and acknowledgments in these modest catalogues reveal close working relationships with museum curators, connections unusual with the trade at that time.  And Philip Blairman himself endeavoured to advance scholarship more widely.  In December 1941, for example, he contributed ‘Chinese Mirror Paintings of the Eighteenth Century’ to The Magazine Antiques.