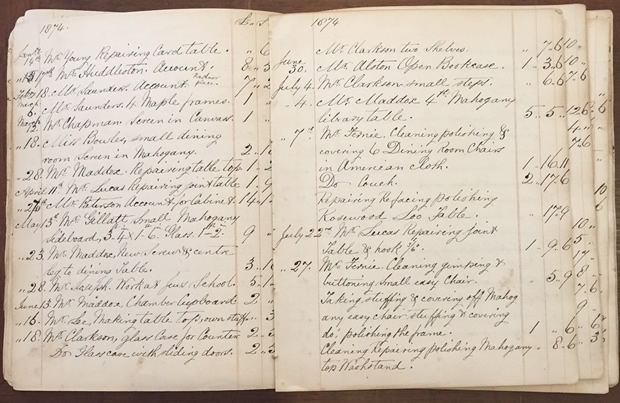 While considerable evidence, such as insurance records, bills (perhaps matched to surviving furniture), letters, rate books and, sometimes, personal accounts, exists for the activities of larger cabinet-making firms, day-to-day records for smaller, more general workshops are far scarcer. Thus, it is fortunate that the late Sir Francis Watson (1907-92) found and preserved the Daybook, now in our possession.

The Daybook (in the format of a ‘cashbook’), with marbled-board covers, measures 20 x 15.5 cm.  Sadly, the inscription on the front (see below, right) is illegible and so gives no clue to the original owner.  The first page, inside the front cover, is dated and inscribed ‘October 4th 1851 Jefsy [?] Guild Work’.  The next page, written in the same, neat hand, but offering no explanation for the gap, is dated 30 May 1859 (see below).  The compiler of this book is the same throughout, but the handwriting begins to deteriorate somewhat with the passage of time. 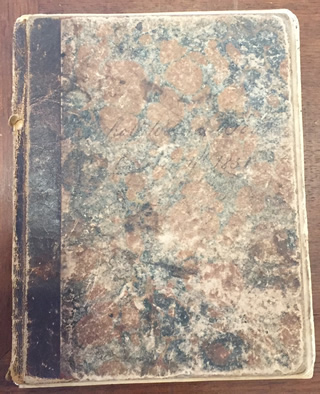 The first of the sequential entries, dated 30 May 1859, reads: ‘To A Spanish Mahogany Pedestal Toilet / Table – Mr Forman.  Not Polished [£5]’ and the last but one, 8 July 1885, records: ‘Mr Young two.3.notch trays, open [14s]’. All the evidence from the pages between suggests that the Daybook relates to a small-scale workshop that both made and repaired furniture, as well as offering other household services such as ‘ Mr Westlake. Making two ventilators / to dining room windows’, and ‘Mr Maddox work in Brook Street’.  Indeed, the Daybook records a range of unglamorous but necessary skills: ‘Captain Elwes Deal Box as before with five trays’; ‘Mending gas pipe in bedroom’ and ‘Mending Water Pipe in kitchen’; ‘making seat for Water closet, own stuff’, an ‘ironing board’; ‘doing up [a] chair’; ‘Repairing Pianoforte’, and ‘Repairing 8 day Clockcase – Time  – new key … Glass’.  The Daybook includes the names of customers and sometimes clues about their addresses; probably the names of workmen; the type of furniture manufactured, and the degree to which (as shown above) repairs were a significant aspect of the services offered. The relatively small number of monthly entries does not suggest a large concern. 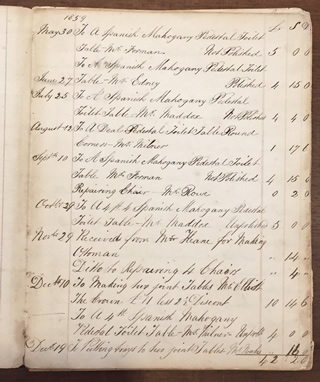 Customers’ names (and locations) include: The Crown (a public house?), Major Scott, Mrs Lincoln, Mr Williams. Adelphi, Chesterfield House, E. Rhodes Esq., Science & Art Museum, Dublin, The Arts Club, Lord Lilford (1833-96, a founder in 1858 of the British Onothologists Union, who owned Liford Hall, Oundle, Northamptonshire and Bewsay Hall, Warrington, Lancashire), Viscount Walden, later 9th Marquess of Tweeddale (1824-78, an ornothologist) and Canon Tristram (1822-1906, the parson-naturalist, who was an early supporter of Charles Darwin).  The frequency and way in which the name Maddox appears strongly implies that this was an employee. Most of the addresses suggest that the workshop was based in London.  Minor repairs were carried in fashionable parts of the city, including Chelsea, Harley Street and Regents Park, but also south of the River Thames in Southwark, Sydenham and Elephant & Castle.  The Daybook also includes notes of accounts rendered, invaraibly for a few pounds or less, and seldom exceeding £20.

An interest in natural history and science connects some of the workshop’s customers, such as Lilford, Tristram, Walden and the Dublin Science & Art Museum.  Moreover, in May 1870 the firm supplied a Miss Moore with a ‘Black stand for case of birds’ and in May 1882 under and entry for a cabinet for R.G. Wardlaw-Ramsay (1852-1921, another keen ornothologist and whose mother was a Tweeddale) is written ‘humming bird’.

The new furniture recorded is by and large fairly modest: a ‘deal cabinet’, a ‘Moving Bookcase’, a ‘Music Stool’, a ‘Mahogany Chest of Drawers’, a ‘Mahogany Watch Stand’, ‘two Sycamore Washstands – own material’ and a ‘lined box for China’.  But as well as cabinetwork and upholstery, the workshop could deal with metalwork repairs too.

The chance survival of this slim volume sheds light on the activities of an apparently successful firm whose history would otherwise be totally lost.  The Daybook provides an insight into how the needs of both aristocratic and middle-class households, small businesses, and organisations were serviced, and the glimpse of a small London workshop during the third quarter or so of the nineteenth century.

This note is intended to draw attention to the existence of the Daybook, with the hope that it will lead to further discoveries.